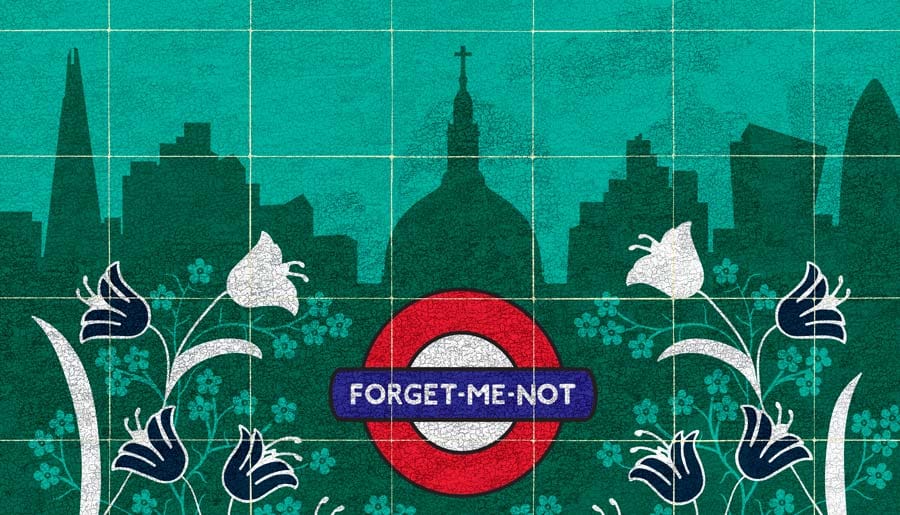 The Postman’s Park poster, that currently features in the Flow Calendar 2019, tells a story of a fabulous space in London. This post gives an insight into the park itself and the thinking behind the illustration.

Postman’s Park received its name from the fact that postmen from the nearby post office, the UK’s first purpose-built post office building, used to come here to have their lunch.

This secret park is easy to miss as it’s surrounded by modern buildings. It offers many benches and a fountain to enjoy the beauty and peace in the middle of a busy city. The edges of the park hold several layers of gravestones of all sizes that date back a long time. This small churchyard is located very near St Paul’s cathedral in the middle of the City of London.

The park also hosts the Watts Memorial, which is a wall of tiles commemorating ordinary people who have given their lives to save others’. The memorial states G. F. Watts’ quote next to it: “The material prosperity of a nation is not an abiding possession; the deeds of its people are.”

The 52 stories that the tiles reveal undoubtedly raise questions about the values of modern times, particularly those of the world of business which surrounds the park. They also speak of a strong sense of community and compassion.

The juxtaposition of the park’s peacefulness in amongst the busy city, old versus modern and the extraordinary stories of these ordinary people are all striking themes that run through the park.

Another interesting aspect of the memorial is the tiles themselves. There are two types of tiles on the memorial: the older tiles designed by William de Morgan and the Doulton tiles – both from the Victorian tiles. In Victorian times, flowers used to have meanings. There are several great resources out there about this, one of them is a post on the website of the Royal Horticultural Society about the language of flowers.

What’s interesting is that flowers that used to have strong meanings were all common garden flowers – ordinary if you like. This resonated with the common people who became heroes. In the Victorian art of floriography, the bluebell represented humility and constancy. The presence of a bluebell in a floral bouquet would have symbolised one’s unwavering devotion to their love, through the means of this coded message.  Tulips represent deep love, but as one of the early flowers of spring they also mean ‘rebirth’ – showing a sense of hope.

Postman’s Park is a place of reflection that is made extraordinary by ordinary people, represented by ordinary flowers in my design. I highly recommend paying a visit if you are near St Paul’s in London.

The poster is available in my shop, in various sizes.

Sign up to my quarterly newsletter to hear about new projects & shop updates.
You can unsubscribe any time.